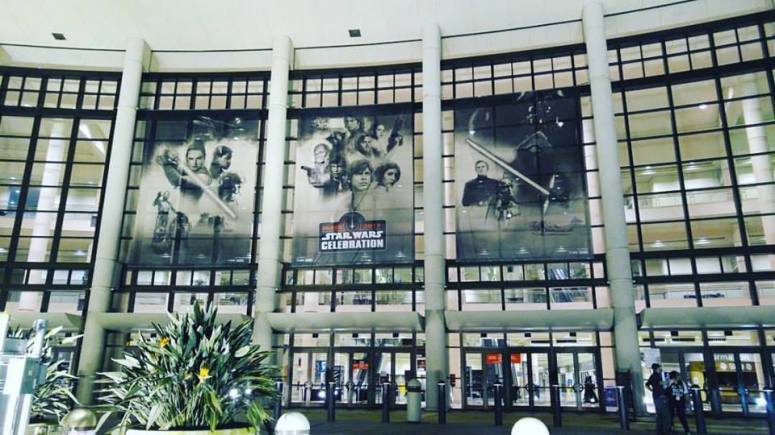 It’s April and time for trip #4. This time I’m headed off to Orlando for a special event, Star Wars Celebration! If you’re a Star Wars fan like me, you know how exciting this is. What’s most exciting? The realization that episode 8 trailer will be debuting during the week. I mean, it was a rumor but a well informed rumor. I haven’t made it to one of the celebrations before so I was super looking forward to making it out.

To my shock and awe, my brother wanted to come. He lives 20 minutes from me but it’s been almost 2 years since he’s wanted to hang out so nothing was going to cancel this trip! I was also happy to have my first flight of the year since so far I’ve been able to drive to everything else. I always look forward to flying but I wish there was something I could take to keep me chill the whole flight. I’m sure there is. I just have to keep a wet wash cloth with me and turn my air on high and when I feel it, I close my eyes, wipe my face, and sit silently under the air. However, I still love flying.

This was my first flight with Southwest Airlines and I was a bit uneasy about the pick your seat option to begin with. Once I got there, I understood a little better and it wasn’t as bad as I had imagined it might be. Everyone is divided into sections according to their #. My brother and I were in the 20s so we boarded together and sat together. We flew from Dallas to Houston then to Orlando. On the last leg of the flight, we sat next to an older gentleman who chatted a lot and invited us to his parents house once we landed. I’ve been back from the trip for a time now and I still haven’t heard from him.

Anyway, this trip ended up being more than a celebration of all things Star Wars and turned out to be a mini family reunion. I have a cousin in Orlando I haven’t seen in a decade and one that happened to be taking her kids to Disney World the same week that I also hadn’t seen in a decade. It was kismet.

So after we all had a couple of lovely meetups, it was time to *celebrate*. We have made it to the Orange County Convention Center! We came the night before to get our badges so we could avoid standing in line the next day, or so we thought. We were unaware of the option to sleepover in order to be in line for the panels. You are able to get in line for a wristband as early as 6am but to sleep over you could basically have a spot. Unfortunately, some people who slept at the OCCC woke up to discover other people came to get in line before they woke up and they ended up without wristbands. To be fair, there should have been saved spots for those who slept over. I’m just glad we didn’t decide to get our stuff from the hotel and do the same. We were staying at the Quality Inn & Suites which was only 3 miles down the road. It was right next to a ton of restaurants and across the street from the Orlando Eye. Uber from Quality Inn to OCCC was around $5. If need be, we could have walked. The weather was perfect.

In total, my brother, cousin, and I were in attendance to SWCO for 2 days. It was a wonderful experience. Star Wars was everywhere! There were cars painted and made up to look amazing. There were quite an eclectic mix of costumes and characters. There were several stages from which to see panels and a whole lot of celebrity appearances. You could get autographs and buy tons of MERCH. I was proud enough to have made it to a live panel with Mark Hamill and closing ceremonies. Both of those were on Sunday and I got there early enough to not need to stand in long lines for the wristbands. I arrived around 9:30 and walked right into the cue, very lucky compared to the other day. To see the trailer for 8 on the big screen before anyone else was just a magical dream. To listen to Mark Hamill recount memories of the late Carrie Fisher was tear inducing. To witness Hayden Christensen, Harrison Ford, Daisy Ridley, and many more talk about Star Wars was thrilling. There’s something so wonderful about a story that brings together so many people. For more photos of all the amazing stuff I saw, feel free to check out my album here.

As far as negatives, I’d have to say there weren’t many. They even thought ahead and had about 10 different food court options and I never had an issue finding a restroom. The panels, however, need to be rethought. The wristband, the sleepovers, the impossibility of actually getting to do anything if you’re standing in line for a band for a popular panel is not cool. On that note, the long line to get into the Celebration store was not something I was willing to spend my time on. I don’t just mean a long line I mean, it was going to be about 3 hours before you got *in* and I was not going to waste precious con time in a line that may or may not benefit me. There was so much stuff to see/buy on the showroom floor that I don’t think I missed out. I bought an autographed poster of which there were only 250 in existence and the artist signed while I stood there. I got a certificate of authenticity. I feel good.

All in all, I will definitely be back in 2019 for the next convention. I love conventions! I used to go to an anime convention every year back where I’m from in Atlanta, for example. The cool thing about conventions is that everyone there is shares a connection and no one will think you’re a geek for being obsessed because so are they. No matter what the convention is for, they are usually awesome. Even if there’s points of contention, such as the wristband situation, when it’s over it’s super sad. Looking forward to Star Wars Celebration in Europe. *fingers crossed*

Be sure to check back next month for the May trip, which has yet to be determined.